The companies under discussion in this article have disclosed their intention to become a publicly-traded company. These companies have released the prospectus for an initial public offering on ASX.

Let’s discuss these businesses that are due to debut on ASX possibly.

The company’s distribution capabilities include a network of health food stores, independent grocers and non-major supermarkets in Australia. In addition, it markets products through online retailers and its own website.

13 Seeds was founded in the year 2016, and its initial range was cosmetic products like facial serum, body wash, day cream renewal, night creams and toners. Following the legalisation of hemp for human consumption in 2017, the company seized the opportunity and launched a gourmet food range.

13 Seeds has no intentions in the primary production of hemp and acquisition of manufacturing facilities. The company intends to develop the brand presence and reach across several products with an initial focus on food.

It intends to source hemp seed from Tasmania in priority, contingent on availability, harvest, quality and price. The company would seek a relatively less capital-intensive model with reliance on 3rd party providers including contract manufacturers, primary producers, wholesale distributors, logistics providers and retailers.

Initially, the company intends to focus on food, nutraceuticals, and skin care markets. Moreover, it would continue to develop new hemp-based products based on the consumer expectations, demand, etc.

In addition, there is a secondary offer wherein the company would issue 3.75 million shares upon the conversion of convertible notes and an issue of up to 7 million options to the lead manager or its nominees. The offer is scheduled to close on 3 December 2019 at 5 PM AEDT.

Founded in 2013, MoneyMe is a digital consumer credit business leveraging its technology platform and big data analytics to provide an innovative loan offering to tech-savvy customers. Since inception to 30 September 2019, the company has originated over $340 million in loans via its risk-based lending platform.

It is operating in the online consumer credit sector in Australia, providing finance solutions to consumers to meet varied personal funding needs. The services are targeted to customers seeking fast, convenient and simple access to credit from their mobile devices.

MoneyMe’s Horizon Technology Platform completes the applications process in approx. five minutes, and funds are released shortly after the approval. It leverages algorithms to provide personalised, risk-based pricing that allows to balance the risk and return in the loan book.

Its loan revenue comprises of a combination of interest rate charges and fees. Moreover, the company’s loan processing and risk-assessment is automated through in-house developed algorithms. 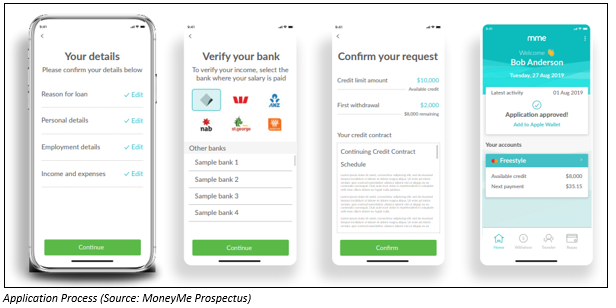 MoneyMe personal loan product allows a customer to receive credit funds in between 2.1k to 25k with a tenure ranging from three months to three years. Its payments are based on fixed amortisation with automated direct-debit instalments on a weekly, fortnightly or monthly basis.

Its Freestyle Virtual Credit Account has a credit offering in the range of 1k to 10k with revolving term. The product payments are based on fixed amortisation with automated direct-debit instalments on a fortnightly or monthly basis.

The company is offering 36 million shares at an issue price of $1.25 per share, resulting in an expected raise of approx. $45 million. The shares offered under the IPO would represent approximately 22.7% of the shares on issue at completion, and total number of shares on issue at completion would be approximately 169.4 million. In addition, the offer is closing on 6 December 2019.

Founded in 2013, Openpay Group was originally formed as an in-store digital solution for lay-by targeting retailers and their consumers. The company provides a payment platform to improve the experience of merchants and consumers.

Presently, the company caters to merchants from retail, automotive, health care and home improvement. It works in partnership with merchants to develop a wide variety of plans ranging from two months to twenty-four months in tenure with values ranging from $50 to $20k.

The company’s plans are presently available in Australia, augmented by additional merchants and customers in New Zealand. In the UK, the company is progressing with its services, offering two to three month plans for up to £1,200 in the retail segment.

The company is offering approx. 31.25 million shares at an issue price of $1.60 per share to raise approx. $50 million before costs and expenses. The shares offered under the IPO would represent approximately 33.3% of the shares on issue on completion of the offer. The total number of shares on issue at completion of the Offer would be 93.75 million.

Loss for the year was $14.7 million compared to $4.4 million in the previous year with significant increases in employee benefits and other operating expenses.

How to Make Money by Investing in IPO Stocks on the ASX?

What’s Latest In The IPO Space?