Altium Limited (ASX: ALU) was established in 1985 and headquartered in La Jolla, California. The company is engaged in the development and commercialisation of electronic design software used in the product design of electronics in the United States and other countries globally. In Australia, the company is based in Chatswood, New South Wales.

Recently on 13 May 2019, the company announced that it would be holding its 2019 Annual General Meeting (AGM) on 6 December 2019, the timing of which will be decided and disclosed in due time. The ASIC (Australian Securities and Investments Commission) has also approved the extension of the period in which the 2019 AGM will be held.

The reason behind the request concerning the extension is to allow Altium to coordinate the timing of its 2019 Technology Day with its AGM (both of which will be affected by the date on which the 2019 United States Thanksgiving public holiday falls), and to allow the Altium senior executives and Board members based in the United States sufficient time to travel to Australia to attend the Technology Day and AGM.

Altium will mail its 2019 notice of AGM and annual report, and file its 2019 financial report, on a timeline as if the extension had not been granted, so that there will be no delay in shareholders receiving these documents.

According to the companyâs half-yearly results for the six months ended 31 December 2018, Altium recorded an excellent growth of 24% in the revenue to the value of US$ 78.1 million with the record level of profits. In addition, the EBITDA margin stood at 36.3% and the net profit after tax increased by a staggering 58% to US$ 23.4 million.

The revenues from China were up 49%, thus leading the overall growth. Besides, the revenue from the Board and Systems segment grew by 17% to US$ 58.4 million, and the Altium Designer new seats were up 34%. The subscription pool expanded by 9% to the value of 39,179. Octopart also continued its impressive performance with 80% growth in revenue delivered. The operating cash flows amounted US$ 26.8 million, up 80%.

According to Altium, it is well on track to achieve market leadership by 2020. 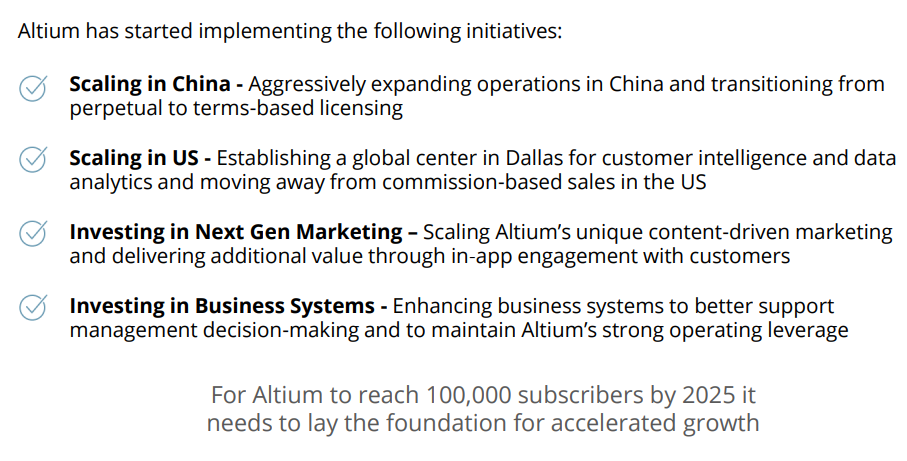