The software industry has seen amazing growth and is anticipated to sustain its acceleration curve in 2020 and beyond.

Software industry is gaining from an increasingly strong digital transformation environment. The last few years have seen a sequence of breakthroughs in cloud computing, predictive analysis, artificial intelligence (AI), digital personal assistants and Internet-of-Things (IoT), which set the platform for robust growth in the software industry.

Additionally, a continuous enterprise investment in Big Data and analytics coupled with the ongoing implementation of Software-as-a-Service (SaaS) poses a substantial growth opportunity. Markedly, the cloud provides a flexible and cost-effective platform to build and test brand-new applications and the implementation time is also much lesser in contrast with legacy systems. SaaS companies are likely to register a top-line expansion due to a greater percentage of recurring revenues, subscription gross margin and a softer churn rate.

As per media findings, public cloud revenues are predicted to increase 17% in 2020, mainly propelled by SaaS, which is expected to lead as the largest market segment due to the scalability of subscription-based software.

The growth prospects also appear to be optimistic given an improved spending by enterprises on software procurement. According to media sources, after a slow 2019, worldwide IT spending is expected to bounce back in 2020 with prediction growth of 3.7%, attributable to enterprise software spending, which is expected to beat a record high growth rate of 10.9%.

Notably, enterprises are seeking to rapidly migrate to cloud and DevOps technologies for attaining scalability and responsiveness in favour of software development and IT operations, which eventually help providing an impeccable digital experience to clients.

We have chosen four software stocks that are well-poised for remarkable returns in 2020.

Xero Limited proposes an online business platform to small and medium businesses. Xero incorporates with more than 400 add-on applications letting customers to modify Xero to their needs and requirements. The company has a total subscriber base of >2 million globally.

WiseTech Global is engaged in providing cloud software solutions to the logistics industry both abroad and domestically. The company’s top product, “CargoWise One”, offers end-to-end logistics solution, and forms an essential part of the supply chain globally. 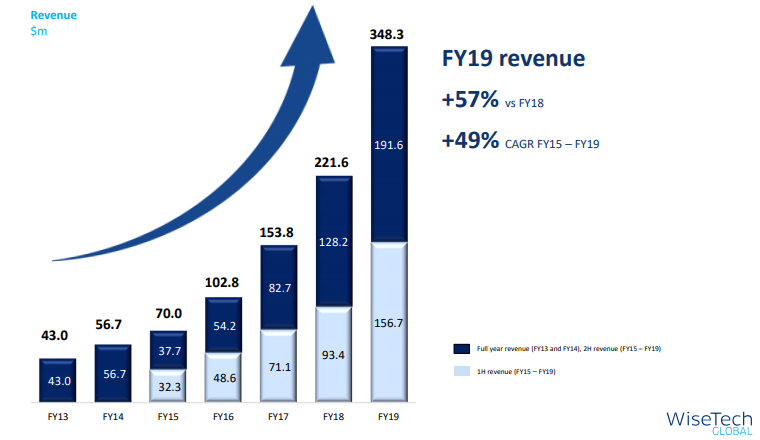 Altium Limited is one of the foremost providers of PCB design tools and components coupled with data administration software. The company’s leading product is best acknowledged for its skill in 3D Printed Circuit Board (PCB) Computer. The company has also assisted several companies in creating next-generation electronic products and systems.

For FY2020, the company anticipates revenue to be approximately US$200 million and expects EBITDA margin to be in the band of 37% to 38%. The company expects to attain subscribers of 100,000 in the long run.