Healthcare/Biotechnology stocks are attracting investors from everywhere due to the longer life spans and ageing population. These are especially attractive to investors looking for explosive gains and are somewhat risk tolerant. Let’s look at three such stocks:

BIOTRON LIMITED (ASX: BIT) – After 12 weeks of antiretroviral therapy and BIT225 in an HIV1 Phase 2 clinical trial and has been accepted for presentation at HIV DART and Emerging Viruses 2018 at the meeting to be held in Florida. Estimates by GBI Research indicate that the market for HBV drugs is expected to reach US$3.5 billion by 2021. Raising $1.4 million after costs, the company completed a capital raising by way of an underwritten renounceable rights issue, in the second half of the financial year in review. There were no changes in environmental or other legislative requirements during the year that have significantly impacted the results or operations of the company. The stock surged by 4.762% to $0.220 and has seen a performance change of a staggering 950.00% over the past 6 months.

VOLPARA HEALTH TECHNOLOGIES LIMITED (ASX: VHT) ­– With HY revenue from customers sitting at $2.3M which is an increase of 83% compared to HY2018. With expectations as set out in the capital raise in May 2018, the company costs have risen this HY entirely consistent, when the forecasted costs to rise as it pursues more aggressive growth, especially in the US, however, the overall loss has risen to $5.0M. Also, the company retain $20M in the bank as at the end of Q2. The Annual Recurring Revenue (ARR) as at the HY was $4.8M which is up by 35%. The cash and cash equivalents at the end of the period was of $2.247 million with zero debt representing a decent balance sheet. The stock declined by 4.93% to $1.350 but has seen a performance change of a staggering 98.60% over the past 6 months. 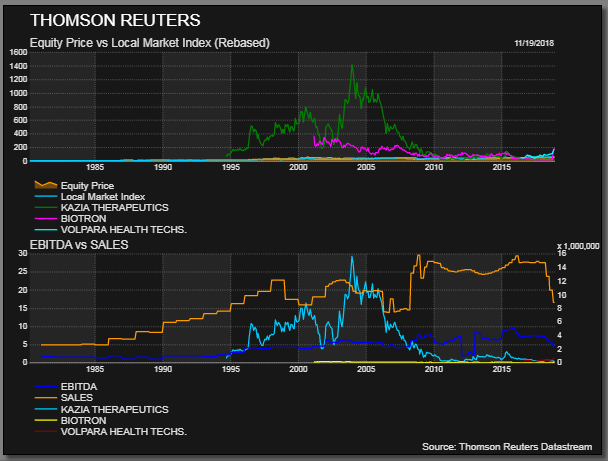