Media industry includes various segments such as television, cinema, music, print media and digital media. The trends and drivers for each segment is different across sub-segments, geographies and customer segments. This makes the industry unique, as these verticals compete, compliment and combine to meet the growing demand for media and entertainment across the globe. The industry also depends on various factors such as cloud network, internet access speed, mobile and social media, among others.

Consumer demand and preferences change with time and technological developments. Shifting customers’ needs in terms of how and when to access content have changed the way the entertainment industry connects with consumers. Additionally, over 85 per cent of Australians own smartphones and the number of people using smart devices to access entertainment has been increased drastically over the last five years.

The media & entertainment industry in Australia is growing at a phenomenal rate and is expected to maintain an average growth rate of 2.1 per cent in the future, surpassing $40 billion by 2025, according to a 2017 report by PwC. Moreover, growth is anticipated to be distributed unevenly across various sub-segments.

Below discussed are two players from the communication services space that were trading in the red zone on 22 October 2019 (AEST 12:35 PM). Let us have a look at their recent developments and performance on the ASX.

New South Wales headquartered NEC is a media and entertainment company, which primarily operates into two segments – Television and Digital.

Recently on 17 October 2019, the company announced that National Australia Bank Limited and its associated entities listed in Annexure A ceased to be a substantial holder in NEC.

Compulsory Acquisition of Shares in MRN

The company also advised that conditions concerning the offer were satisfied at the end of the offer period. Owing to which contracts resulting from acceptances are now unconditional. Thus, the shareholders will receive payment for their shares in Macquarie Media Limited within 21 days, which is in accordance with the offer terms.

Moreover, the company informed that its subsidiary Fairfax Media will now compulsory acquire the outstanding shares in MRN, as it has a relevant interest in more than 90 per cent of the MRN shares. Additionally, to those MRN shareholders, who did not accept the offer, the notice about compulsory acquisition will be despatched by the subsidiary. 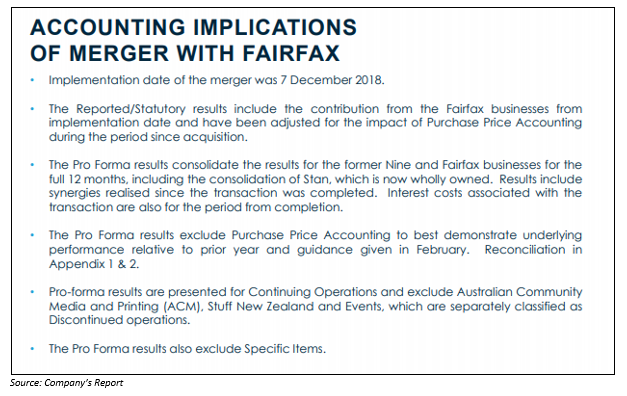 For FY20, the company is expecting to report pro-forma group EBIDTA growth of approximately 10 per cent, pre the impact of the AASB16 and purchase price accounting adjustments. Interest expense to fall in the range of $15 million to $20 million, pre MRN. The dividend is expected to be similar in cents per share to FY19 and fully franked, with capital expenditure likely to come at $110 million - $120 million.

Australia-based entertainment company Southern Cross Austereo provides services to more than 95 per cent of the population in Australia. The company, operating various media channels, is headquartered in South Melbourne, Australia.

On 18 October 2019, the company announced to have proposed to acquire Redwave Media, which is the regional radio business of Seven West Media Group Limited (ASX: SWM) in Western Australia, in a cash deal worth $28 million.

In another release on 15 October 2019, the company announced trading update and guidance for six months ending 31 December 2019. The company, which believes to have achieved consolidated advertising share gains in the previous equivalent period, is currently trading in accordance with media markets.

First quarter operating costs were $1 million less than the prior equivalent period. The company expects EBITDA for the first half to fall in the bracket of $60 million to $68 million. Cost discipline remains a core focus for the company, which will continue to focus on expanding its market share while focusing on controlling costs across all the divisions.